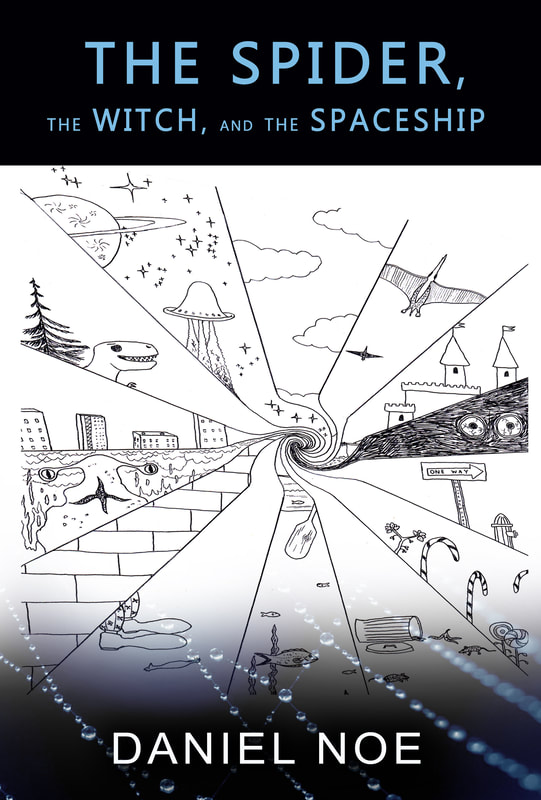 This is the story of a man named Nate who finds himself living in a psychiatric health care facility. He does not remember how he got there, but as he starts to remember things from his past life, he realizes that the universe has changed dramatically since he was young. A story of childhood nostalgia, sometimes comically illuminating the differing perceptions adults and children have of the world, The Spider, The Witch, And The Spaceship is also a journey through the memories of a man for clues as to the real reason he is where he is. Filled with tension between opposing claims of the ultimate reality, this is a novel that will keep the reader guessing until the end.

I got the idea for this book from three phenomena I’ve noticed in my life. First, people will sometimes remember events differently (including very recent ones). Second, science fiction plot ideas will come to me from observing things in the real world so that my fantasies have parallels in reality (like the way this book came from three real-world phenomena). Third, growing up can be a shock. I remember changing schools in third grade to find that culture can vary wildly between districts. I didn’t know any of the slang. I went from being highly popular in a small school to being perpetually teased in a much larger school. It was as if the world had changed and I was the only one to notice. Familiar with the idea of parallel universes from watching television, I began to wonder if I had shifted into a parallel universe with a different history. All this led to the idea that Nate would have a neuropsychological condition causing him to create fantasies out of his surroundings and thus remember things differently, especially his childhood – or is Nate merely from a universe with a different history? You’ll have to read the book.

I tried to capture the spirit of childhood while observing the bewildering world of adults through the eyes of a child. I did my best to show the excitement, the wonder, the cute assumptions kids make when they don’t know any better, and also the frustration. I miss the playground and I don’t know why people grow up and become boring when they don’t have to be or why adults are quicker to punish than to explain. I don’t understand why most adults are annoyed by behaviors I cherish and wish I still had the energy for (such as skipping everywhere). Cherishing childhood is something important to me.

There is an interesting story behind the creation of the title. I was writing the book to introduce the character Nate for future episodes in a potential series, but I still didn’t know how to end it. My working title was In The Beginning. My father suggested I needed something more memorable, such as The Spider, The Witch, And The Spaceship. At first, I didn’t see that it fit. While there was a spaceship at the center of the story, there was no witch and the only spider was just a recurring part of the scenery. Then in an instant an idea hit me and I knew how the spider and the witch fit perfectly – and that gave me the ending I needed.

Of course, no science fiction novel would be complete without a healthy dose of technobabble. Below is an excerpt from the time Nate tries to solve the mystery of what is going on with him:

Nate suddenly stops talking. “Hold on! How could I have known if you were really a brunette if it was just a false memory?” Nate asks, his mind suddenly snapping back to the conversation earlier that morning.

“Hmm? What do you mean?” Alisha questions.

“If you’ve been blonde for years, there’s no reason for me to misremember you as a brunette yesterday unless in some parallel timeline you never dyed your hair. I must be remembering something real. I didn’t remember you as a red-head, something I presume you’ve never been,” Nate explains.

“It’s only a coincidence. You just happened to be right this time by chance,” Alisha claims.

“No, don’t you see? This proves it,” Nate says, “How could I remember hidden truths never revealed to me unless history really is changing? No matter how overactive my imagination might get, I’m not going to make up the truth.”

“Nate, it’s a coincidence. There are only so many hair colors,” Alisha insists.

“It’s not just that,” Nate says, “You told me your father wanted to name you Allison. In another universe with some other history, he must have prevailed. That must be the universe I was just in before it changed into this one. That’s why I thought your name was Allison: In some other universe, you are.”

“Now what would cause that? Tachyon oscillations? Infra-dimensionality conversions? This high above absolute zero? What could serve as the catalyst? Anyons? Retrons? Pseudomesons?” Nate interrupts, scratching his chin and looking at the wall.

“Wait! If the tensors apply to scalar time, our rest-space would be able to change its topological probabilities matrix without causing a catastrophic inversion! That must be it! It’s a form of fifth-dimensional shift!” Nate says, leaning forward in his chair.

“I’ll have to do some testing to determine whether we have an embodied or disembodied anomaly,” Nate goes on, getting up. He grabs some paper and a pen from nearby and starts rapidly scribbling overlapping circles and figure-eights, mumbling and softly laughing to himself.

The Spider, The Witch, And The Spaceship is 85,446 words divided into 19 chapters and makes a great read. The cover depicts the many alternate histories that Nate slips through as he reaches into the spaceship’s engines to grab the crystal.